Dear Visionaire-ites, it has been a long time coming... After several exhausting months - for the devs, not us - of hard work, sweat, tears, & stubborn determination, we have finally reached the next big milestone, in our quest for the ultimate adventure game engine. We are proud to present Visionaire Studio 4.0 beta, the [i]cross-platform[/i] edition of our game engine. Visionaire Studio 4.0 offers many new & exciting features, such as: a [i]native[/i] editor for the [b]mac[/b]. Export options for [b]windows[/b], [b]mac[/b], [b]iOS[/b], & [b]android[/b], 3D character support, an updated walk system, which makes it possible to create a more natural looking walk cycle. The editor & engine has been completely overhauled from the ground up ([i]almost[/i]) to get it ready for cross-platform support, & in the process has been [i]fine tuned[/i] for performance optimization. The editor & engine, will now run [i]much faster[/i], require considerably [i]much less[/i] processing power, ram, & vram, etc, to run & is a lot [i]more stable[/i] overall. [b]Important![/b]: Only the freeware version of Visionaire Studio 4.0 beta is currently available for download. Over the next few days, we will be reworking the license models to suit the new release, so please have a little [b]patience[/b], & in the meantime, please enjoy testing the freeware version. 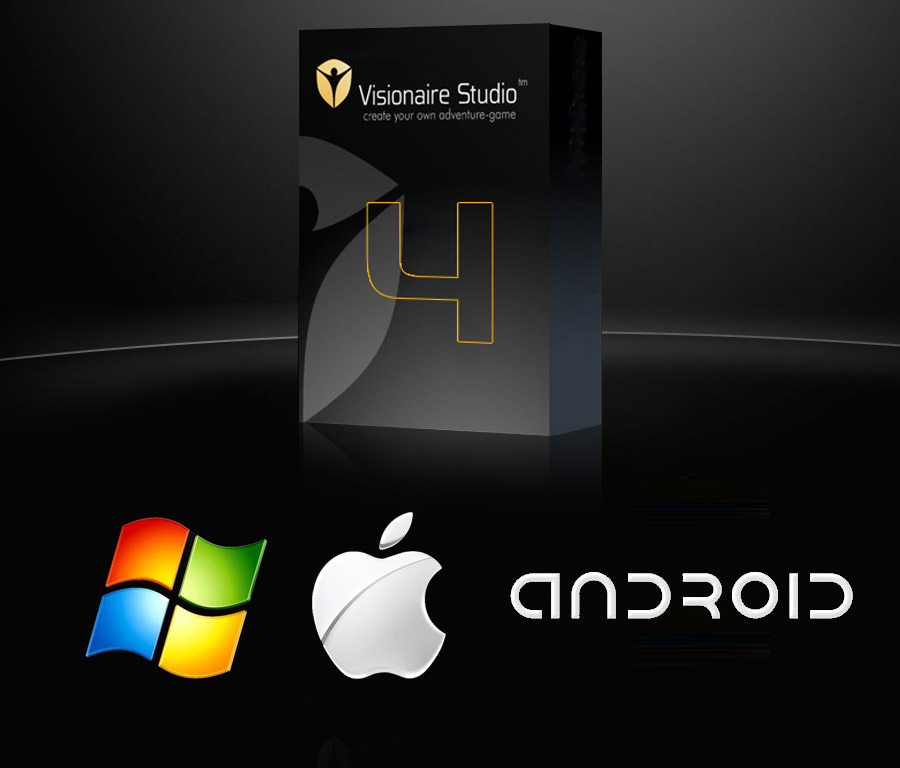 Spoiler
The freeware version is exactly the same as the licensed versions, the only difference being: that the export option has been disabled in the freeware version.
Also we will be hosting a new competition in the near future. The winning entry will become the new official demo game that comes bundled with Visionaire Studio. More details to follow soon, in regards to: prizes, time frame, rules etc... Here are some of the key features/updates of Visionaire Studio 4.0... [list] [*] Native editor for apple mac. [*] Built in export options for windows & mac. [*] Beta support for iOS & android platforms. [*] Drastically optimized performance & memory consumption. [*] 3D character model support, for character animations. [*] Improved walk system, with additional walk options, which grant us the possibility to create more natural looking walk cycles. [*] Smoother character scaling; character size now uses float (decimal) values instead of integer (rounded) values. [*] Optimized walk animations; walking animation is only restarted if the player clicks somewhere which forces the character to immediately change direction. [*] New performance monitor available for games run via the editor. Hit "home" key to toggle it on/off. "inicio" key on spanish layout. [*] Video & Global sound volume options have been added to the "change volume" action part. [*] eMovieVolume & eGlobalVolume options added to the getVolume & setVolume Lua functions. [*] Sound engine has been replaced with openAL, for cross-platform support. [*] Lua sound engine functions: startSound, stopSound, getSoundId, getSoundProperty, setSoundProperty, & toggleSoundPause have been added. [*] Added continue active sounds option to "play video" action; all active sounds will continue playing. [*] New read only data structure table: VCharacterSize; returns float value of character current scale value. [*] Added new data structure table: VGameSpeechLanguage; allows you to set independent language for speech files, as opposed to the speech being the same as the subtitles language. If nothing is declared then it will use the subtitle language by default. [*] Added new Lua function: setWindowTitle; allows you to set a custom title for the window bar. (window mode only) [*] Added systemLanguage option to the getProperties function; allows you to check the current players os language. [*] Multiple mainLoop & mouseEvent handlers are now supported. [*] registerEventHandlers are now stored in save games. [*] Added unregisterEventHandler function; for unregistering mainLoop functions, when they are no longer needed. [*] Added path parameter for Lua script commands. The string for the path parameter should contain a "vispath:" prefix. This ensures that the path will be found after the game has been compiled. [*] Added getTextStr function; allows you to return the string of the linked object based on linked language. [*] Added getTexts function; allows you to get all strings belonging to the linked object. [*] Added getCharacterAnimationIndex option to the registerHookFunction; this makes it easier to check animation index, direction of characters & perform some actions based on the results. [*] Added bool VGameShowBlackScreenAfterVideo table to the data structure; if true, then a black screen will be shown after a video has finished playing. [*] The editior is now available in Italian. (big thanks to Andrea Damico) [*] FFmpeg has been updated, to provide better support for audio & video. [*] Added "stop dialog" action part, to immediately close the active dialog. [*] Added filter to the "text" tab section; allows you to filter list for all texts, character texts, & narration texts. [*] Display speaker text action part has been renamed to "display narration text" [*] Added option to control global speech balance to the main game tab; this offsets the balance based on characters current position in a scene. [*] Replaced text editor in the script tab for one based on the scintilla source code; features color coded syntax, index numbers, & more. The new text editor is a lot more stable than the previous one. [*] Path & filename of selected file is now displayed in the open file window. [*] The edit label mode is automatically started for new list objects; saves time on having to click the rename button. [*] Added option to automatically create "display text" action on new action, to the Visionaire Studio options window. [*] Item animation names are set to the item name of the containing item; makes it possible to call active items animations inside of a Lua script. [*] Onion effect can now be activated in animation mode, independent of other other tools. [*] Display full action text for picked up items; if text should not be displayed then leave name & conjunction name fields empty. [*] Wait until animation has finished for the "play/hide" action part is now active by default. [*] Various sections in the editor now dynamically resize to fit the available area. [*] Added ability to preview scene objects & animations in the way system tab. [*] Can now see the selected scene object/animation inside of the set animation center window. [*] Preview animations etc are automatically disabled if the editor window loses focus; saves a lot of valuable system resources while the editor is not currently in use. [*] Increased visibility of currently selected object in the scene object list, while the draw/edit object area mode is active. [*] Group same texts in the .po export option, as opposed to having multiple entries of the same text. [*] & much more... [*] Fixed the if/else bug delete in the action parts list; if queries were still displayed after being deleted unless the user browsed to a different section of the editor & back. [*] Fixed open window bug; now only one load window can be active at a time. [*] Fixed move animation frame bug; previously sounds/options/actions associated with the frame were not moved with it. [*] Fixed build game bug; previously same files could be added multiple times. [*] Scene preview animations are now always active when preview mode is on; previously only played animations when the mouse cursor was over the scene preview section. [*] & many more... [/list] Furthermore, we would like to thank you all for your continued support, your patience - or lack thereof - & wish you lots of fun, - & & the occasional bit of inevitable self inflicted hair loss, due to frustration - while tinkering around with Visionaire Studio 4.0 beta. Now go forth & bring us some more tasty games to play! The Visionaire Studio Team.