After a very successful release of Avatar the interest to stereo 3D films endures now a bad slump. Some people even think that the 3D is dying and has no future. This decline of 3D demand has a serious background: many movie goers experience headache and eyestrain while watching a stereo film. 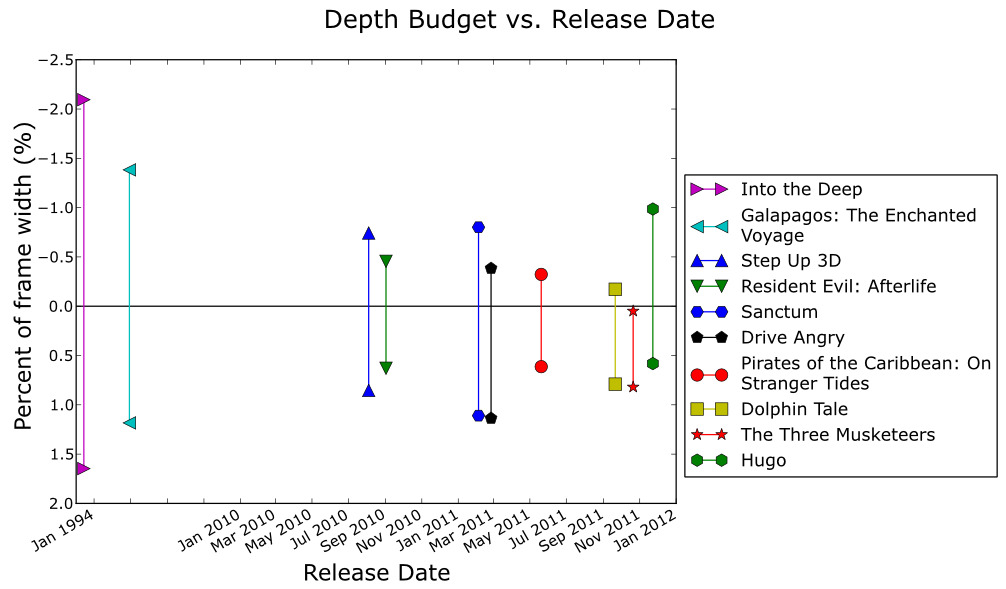 In March 2013 Graphics & Media Lab has released its first report on stereo films quality assessment. This first report presented our evaluation results and overall quality comparison of 5 stereo films. We’ve got a lot of positive comments from professional stereographers on our first report and were encouraged to continue the work on stereo film evaluation and issued the 2nd report. We are planning to publish in the 2nd half of 2013 another three reports and invite the stereographers for cooperation. Now we have a pleasure to share with the industry professionals our second report on stereo film quality analysis, also including five 3D movies filmed in stereo: 1. Dolphin Tale 2. Drive Angry 3. The Three Musketeers 4. Hugo 5. Sanctum The Lab decided to analyze the stereo films, captured with stereoscopic camera systems and to investigate the potential reasons of the irritating annoyance. The main examined problems, discovered during the film analysis: 1. excessive horizontal disparity 2. vertical disparity 3. color mismatch (see Image #1) 4. sharpness mismatch In this report we present an improved metric for evaluation of the views correspondence in sharpness. The new MSU-3Dsharpness-2012 metric enables more precise values for: • frames with strong color distortions between views • frames with large occlusion areas between views • frames with several regions with sharpness mismatch (previous metric selected the largest region with sharpness mismatch) More information on the both reports on stereo films evaluation with the links and charts please find here: https://docs.google.com/document/d/1cmRX2F-VPNi5KaO6w6U_8WQ0...