ASA: A Space Adventure is a first-person slideshow adventure game made in tribute to Riven and 2001: A Space Odyssey. Visit a vast spaceship called The Ark, divided into 6 areas, and discover the truth behind the Cubes... ASA: Remastered Edition is an improved version of the original game from January 2013. 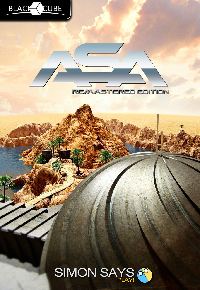 Many thanks to the Visionaire team and all the community for their support. Special thanks to Lee for his infinite patience

ASA: Remastered Edition is the exact same than the original ASA game, except that we've been working on several new features specifically for the Steam release. Despite a lot of efforts in the past, the original version presented different issues that could not be solved, so we decided to restart from scratch with a new game engine! Here's the list of new features: - Rediscover the first project of the Black Cube series (Catyph, The Black Tower) - Visit 6 areas on the Ark + 2 planets (and more!) in HD graphics (1920x800) - Developed with Visonaire Studio, allowing more flexibility and stability - We've added visual aids to identify the hotspots - More translations, no need to patch! (English, French, Italian, Spanish and German) - Available for Windows, Mac and Linux BUY Now on Steam! Also available on Adventure Gamers Store and Zodiac Store